A WEEK’S FESTIVAL OF BEETHOVEN

Music as Beethoven would have experienced it, on instruments of the time

As part of the celebrations to commemorate the 250th anniversary of his birth, the acclaimed Consone Quartet and The Hanover Band are performing an innovative programme of Beethoven’s String Quartets and Symphonies, in a week long festival of Beethoven.

Beethoven in Arundel will feature 3 concerts of String Quartets and all 9 symphonies, performed across the week on period instruments which Beethoven himself would have been familiar with, culminating in Beethoven’s magnificent 9th (choral) symphony, performed on Saturday 29 August, 2020.

The concerts are particularly focussed on encouraging younger generations to experience Beethoven and enjoy classic music in general. For this reason, The Hanover Band is offering tickets free to all those aged 30 and under.

The String Quartet Series will be held at Arundel Town Hall, while the Band will be playing at its de facto home at St Nicholas’ Church, considered a ‘hidden gem’ of Arundel.

The Band has been performing as part of the Arundel Festival for the last ten years. The festival itself is one the largest volunteer-led, community-based multi-art festivals in the South and offers visitors a chance to see a hugely diverse range of performers.

A celebration of Beethoven’s String Quartets performed over 3 days!

After yesterday's peaceful walk in the #countryside, something more energetic and #uplifting. The opening to #Schubert's #Symphony No. 5 #Tenat10 #40years

The sun is shining, so open a window and #listen to this description of the #countryside. It will make you feel like you're there. #Beethoven #Tenat10 #40years #Pastoral 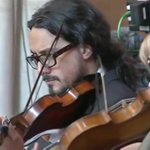